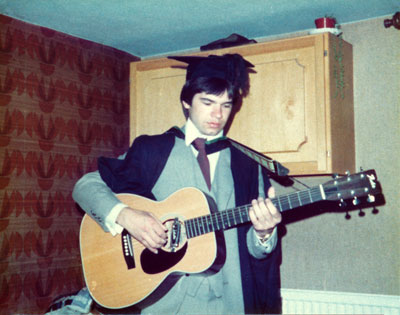 The GraduateI was born in Newcastle-under-Lyme, Staffs, England. I started playing guitar in my teens and at Nottingham University I discovered the Folk scene - a welcoming environment for fledgling performers. Lots of other great gigs to soak up too!

Then I headed off to Surrey where I worked as a food scientist for quite a long time. Music has always been an important part of my life – both playing and helping to run venues such as the Ram Club in Surrey until 2015 and Dorking Folk Club in the 1980s. I try hard to come up with distinctive arrangements for all the songs I perform rather than parrot the originals. My playing style is the culmination of many years playing with and watching people I admire. I don’t think music should be taken too seriously and I like fun as much as finesse! I like lots of different styles of music, especially the Great American song book, classic Rock and Pop, 'Vintage' and contemporary Folk.

I was a member of acoustic-folk trio Soiree until the end of 2015 along with two of the best singers around - Sue Graves and Hector Gilchrist! We performed mostly at Folk Clubs, festivals, gatherings and parties and recorded a CD, 'Serenading the Moon'. Before Soiree I was in a band called ‘Noddy’s Lot’ who ploughed a quirky furrow in many a hive and hovel. We certainly had our moments!